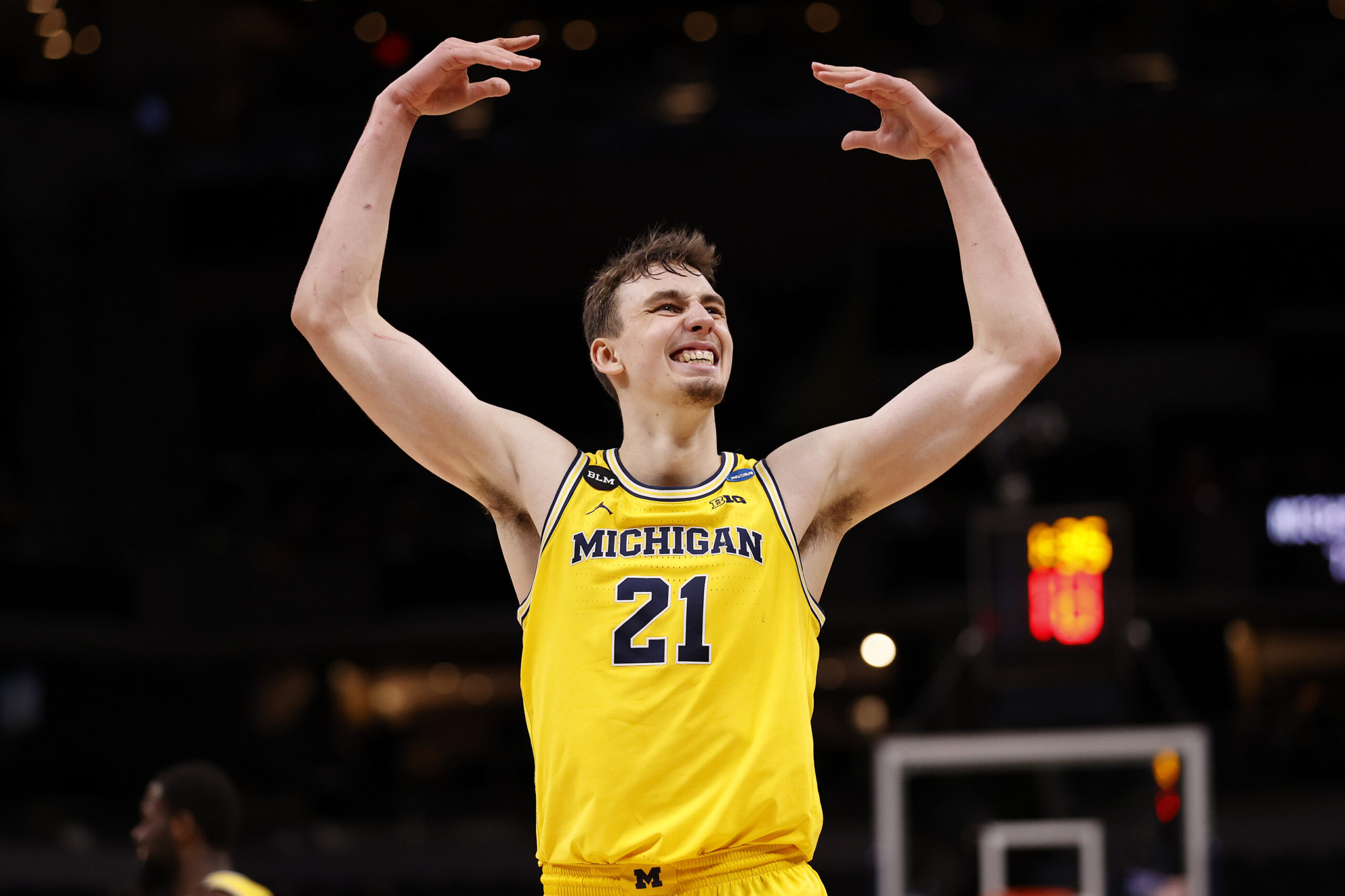 INDIANAPOLIS, INDIANA – MARCH 28: Franz Wagner #21 of the Michigan Wolverines celebrates in the final moments of the second half of their Sweet Sixteen round game against the Florida State Seminoles in the 2021 NCAA Men’s Basketball Tournament at Bankers Life Fieldhouse on March 28, 2021 in Indianapolis, Indiana. (Photo by Jamie Squire/Getty Images)

PLAYER SUMMARY
Wagner is a 6’9, 220 lb wing/forward from Germany who is currently in his sophomore year with the University of Michigan. High energy player with above average IQ. He positions
himself well on offense, makes strong cuts to the basket, and is physical attacking the rim. Started the season shooting poorly from beyond the arc, but finished strong shooting around 38%. Streaky shooter and more of a C&S/off-ball scorer. Even though he rarely commits turnovers and has playmaking ability, he shouldn’t be expected to run an NBA offense. His ball handling can look a bit awkward, has the tendency to force drives, and lacks great court vision. Shouldn’t be expected to be the primary or secondary option on offense, but has the playmaking ability to help in a variety of ways in a supporting role. Wagner is a versatile defender who can defend both guards and forwards, disrupt passing lanes, and block shots. With added strength, he could potentially play as a stretch-4 in small-ball lineups as well. His rebounding ability is excellent for his position. Wagner lacks star potential, but can be an average to above-average starter for a long time.

OFFENSE
Wagner has an all-round offensive game who can play both at the wing and forward positions. He has a high motor and great basketball IQ. He knows where to position himself on the court and makes good cutting reads. Not afraid to attack the rim and is a physical finisher, but he does tend to force drives and looks unbalanced when driving in traffic. Streaky shooter who struggles to create his own shot. Primarily a C&S/off-ball scorer at the next level. Solid playmaking ability, but lacks the court vision and passing accuracy to be a primary or secondary playmaker in the NBA. Elite rebounder who can run the floor in transition. Overall, a solid all-round offensive player who can help in a variety of ways but lacks star potential.

DEFENSE
Wagner is a physical versatile defender with a high motor. Needs to improve his footwork and quickness to defend more explosive guards. Has the potential to guard any position due to his size and defensive ability, but has to get stronger. Disrupts passing lanes and forces turnovers with his long arms, good shot blocker for his position, and excellent rebounder. Struggles in PnR defense as he struggles to fight through screens. This is also an issue when defending off-screen scorers. His shot contests can be wild and lead to unnecessary fouls. Overall, Wagner has good defensive potential due to his versatility and can help a team immediately on that end of the floor.

ROLE/LEVEL PROJECTION
Wagner has the potential to be a Starter/Key Reserve in the NBA with an initial specialty on defense. Can become a solid offensive player and great defender.

DATA SAMPLE
Wagner was the NCAA leader in defensive plus/minus and was second in box plus/minus (only behind Luka Garza). This shows his impact and overall skillset on the defensive end.

INTANGIBLES OR RED FLAGS
Excellent student. He graduated high school two years early. Coaches raved about his intelligence, maturity, and consistent high effort in practices and games. Not a natural leader, but well-liked by teammates. Always wants to win. Expresses his emotions in a positive way on the court (his former coaches in Germany claimed this is uncommon for German players). He missed around 30% of the season when he was 17 due to growth-related injuries. He also broke the wrist of his dominant hand during his freshman year at Michigan. Other than that, he hasn’t suffered any serious injuries.

FINAL THOUGHTS
Wagner might not have star potential, but can be a Starter/Key Reserve for a long time and his defensive skillset can have an immediate impact. He has the potential to be a great versatile defender and be a solid contributor on offense. I’ve spoken to some of his former coaches at ALBA Berlin and they raved about him both as a player and person. They also lauded his family and support system, so there don’t seem to be any concerns in that aspect. Prior to attending Michigan, Wagner played professionally for ALBA Berlin. This professional experience could help him adjust to the NBA quicker.

Editor’s Note: This is a new series featuring scouting reports from Rens Hammerstein, an International Basketball Scout. Stay tuned to NTC for more scouting reports as we near the NBA Draft.