The NBA’s trade deadline has passed, and it was an active one at that. However, that does not mean that fans haven’t seen player movement since March 25th. That movement has also stirred up quite a bit of controversy. The biggest names that have signed with a new team following a contract buyout have been Blake Griffin, Andre Drummond, and Lamarcus Aldridge. Griffin and Aldridge signed with the Brooklyn Nets and Andre Drummond just started his first game with the Lakers this past week. All of the hullabaloo has been about the fact that these three are more accomplished than the typical names bought out, having fifteen all-star appearances combined. In addition, they entered the market in a year where debatably the two title favorites are in New York City and Los Angeles. From a Howard Beck Sports Illustrated article, a small market team executive shared the concern of “players entering the buyout market only going to contending teams, and historically, their preference has been bigger markets. It offers a chance to add minimum contract players who otherwise wouldn’t be available.” At the end of the day, the issue is either that larger markets will always have some sort of advantage, or that a contract buyout is a harmful route for the league to circumvent giving up some semblance of value for an acquisition. However, those are two separate problems, and buyouts favor successful teams over populous cities.

According to ESPN’s Bobby Marks, from 2015 through 2021, the teams with the most signings following a buyout are Milwaukee, Cleveland, Dallas, and Houston. Milwaukee is the only destination with four buyout signings in that span including Steve Novak, Shabazz Muhammad, Pau Gasol, and Marvin Williams. Clearly, the common denominator between the first two aforementioned cities is a multiple-time MVP forward with the ability to dominate the opposition physically and with the threat of the pass. The other two Texas teams are not small markets, but they are teams that have experienced continued success throughout the past decade, and offered ample opportunities to contribute in the rotation.
There has been consistent criteria as of late that applies to many, but not all, who are eventually bought out. This includes having a relatively large expiring contract on a non-playoff team, and not seeking another large contract beyond the buyout. Candidates to come to a buyout agreement before the end of the season include Otto Porter Jr., Kelly Olynyk, and Avery Bradley.

The aforementioned stipulation with “not seeking another large contract beyond the buyout” stem from the idea that a player may diminish their leverage in the future by agreeing to a minimum contract after a buyout. This concern would apply to Porter Jr., who while already considered a buyout candidate before being traded the Orlando Magic, is only 27 years old. It would stand to reason that Porter Jr. would believe that he could sign for more than the veteran minimum this upcoming offseason.

Similar logic applies to Kelly Olynyk and Avery Bradley, who are only 29 and 30 years old, respectively. Even though centers are more replaceable, Olynyk is able to provide exceptional shooting and passing for his position. Bradley, while playing a more valuable position at the guard spot, has been more of a journeyman throughout his career. This includes having been waived by the Memphis Grizzlies in 2019, and signing for only a portion of the non-taxpayer midlevel exception this past offseason. Bradley may be less fearful of harming his reputation for contract negotiations, and more interested in a role with a title team compared to last year’s Lakers. 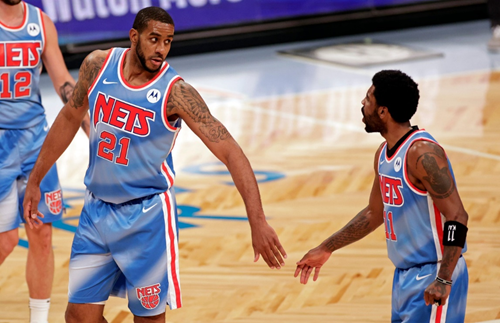