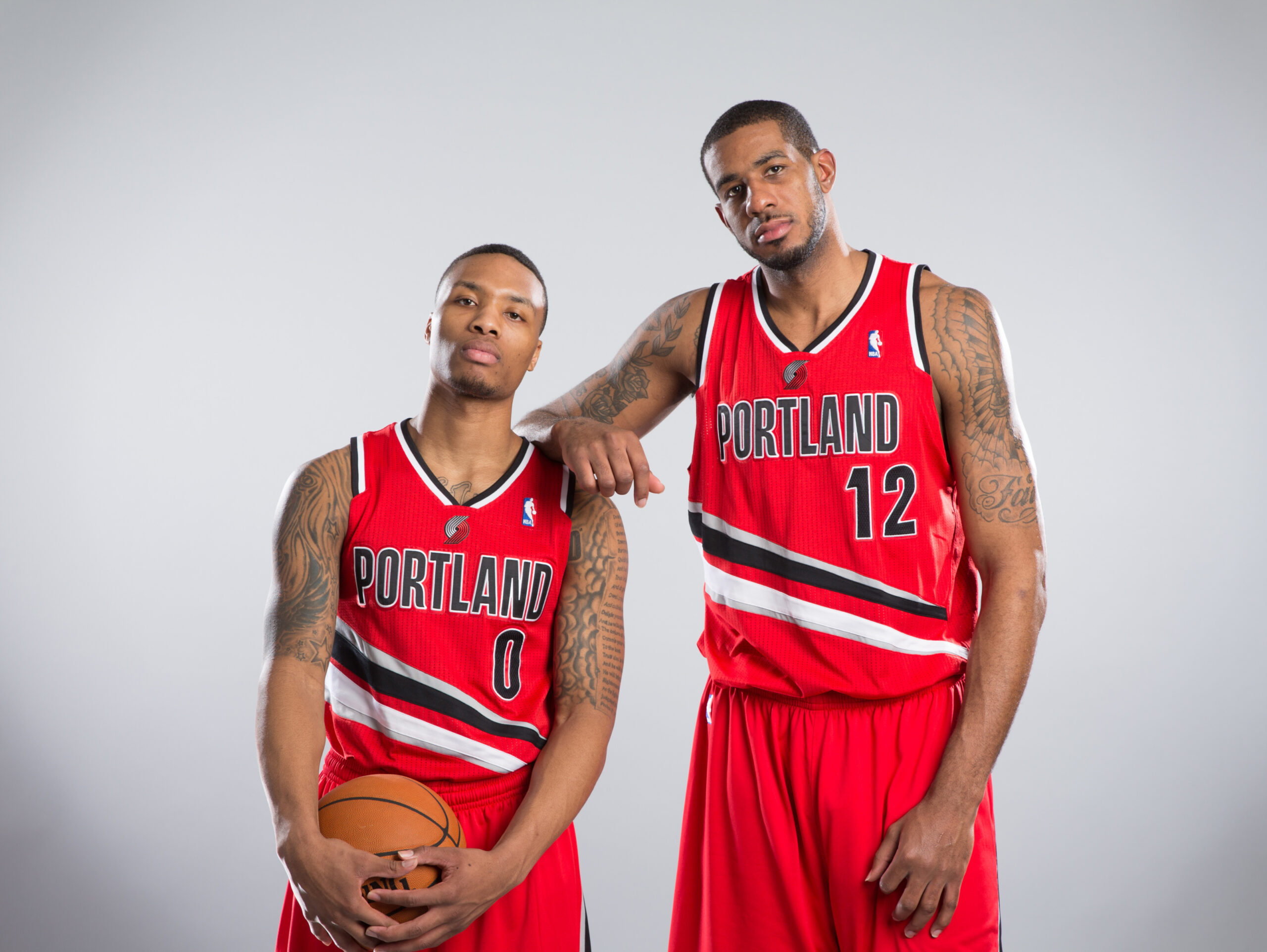 PORTLAND, OR – JANUARY 13: Damian Lillard #0 and LaMarcus Aldridge #12 of the Portland Trailblazers pose for a portrait on January 13, 2014 at the Moda Center in Portland, Oregon. NOTE TO USER: User expressly acknowledges and agrees that, by downloading and or using this photograph, User is consenting to the terms and conditions of the Getty Images License Agreement. Mandatory Copyright Notice: Copyright 2014 NBAE (Photo by Sam Forencich/NBAE via Getty Images)

On Thursday, April 15th, The Athletic’s Shams Charania reported that Brooklyn Nets’ big man, LaMarcus Aldridge, was retiring from the NBA. Aldridge’s last game was on April 10th against the Los Angeles Lakers. In a statement released to explain his unexpected departure, Aldridge revealed that he had fought through an irregular heartbeat during his final game. The most frightening passage that stands out from his statement is, “Though I’m better now, what I felt with my heart that night was still one of the scariest things I’ve experienced.” Fans that have followed the association for 15 seasons, the length of Aldridge’s career, have been able to witness the amazing athletic feats of the players they love. Unfortunately, the fans have also seen cases like this shorten careers many times before. Being in the twilight of his career didn’t make Aldridge’s decision any more difficult than it otherwise would’ve been. However, if nothing else, it’s still disappointing that he won’t have the opportunity to battle for the championship in Brooklyn that led him to leave the San Antonio Spurs in the first place. Even though a title has eluded Aldridge throughout his career, he may have over-performed what he could’ve expected given the circumstances.

Aldridge’s career is marred by teams that won plenty of games, but never got incredibly close to the mountaintop. For example, according to Blazer’s Edge of SB Nation, the Portland Trailblazer’s record in the limited games played between Aldridge, Brandon Roy, and Greg Oden was 50-12, good for a 66-win pace in an 82-game season. Roy and Oden’s misfortune has been outlined throughout the years given all of the accomplishments that their lack of health robbed them of. To make up for yet another Trailblazer success taken by injuries, Portland found themselves on the receiving end of some lottery luck with the sixth pick in the 2012 NBA Draft, Damian Lillard. After Lillard won the Rookie of the Year award, the Trailblazers made it to the 2014 Western Conference Semifinals, then got eliminated in the first round in Aldridge’s final season with the team. During the 2015 NBA offseason, the Spurs won the Aldridge sweepstakes after the Phoenix Suns gave Tyson Chandler a 4-year, $52 million contract to play center alongside Aldridge. The closest Aldridge got to a championship was in his first two seasons with the Spurs, including a 67-win season in 2016 and a Western Conference Finals appearance in 2017. Again, a golden opportunity was missed due to an important teammate’s injury.

Although Aldridge never quite won a ring, he played a vital role on winning teams for essentially all of his long career, and transcended eras as the NBA has evolved so much in recent years. He will always be remembered for his turnaround jumper over the right shoulder on the left block. Aldridge would take that shot all throughout his career, despite the modern NBA’s distain for midrange jumpers. He likely won’t receive enough credit for excelling in a league that outgrew his skillset, and adapting his game only when necessary. In Aldridge’s last full season with the Spurs, he made as many three pointers in 53 games as he did in all nine seasons he played with the Trailblazers. Somehow his resume of seven seasons scoring over 20 points per game, seven All-Star appearances, three All-NBA third team nods, and two All-NBA second team honors leaves many questioning if he deserves to be in the Hall of Fame. Fortunately, a Hall of Fame induction does not determine whether one looks back fondly on a player’s one-of-a-kind scoring abilities and longevity.