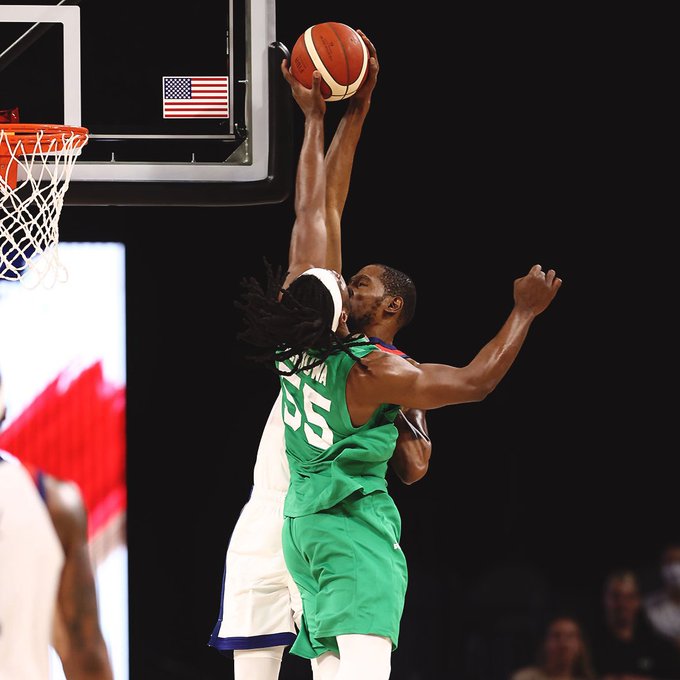 Team USA played Team Nigeria in an exhibition match in preparation for the Tokyo Olympics. This was the first of five exhibition games the teams will play. Team Nigeria defeated Team USA by three points, 90-87 in one of the biggest upsets in recent memory.  This could be the best win for any country on the continent of Africa in basketball history. Although the game was an exhibition, it just didn’t feel that way. Team Nigeria played relentless, team basketball and pushed the pace throughout the entire game. Gabe Vincent led the way for the D’Tigers scoring 21 points on 6-of-8 shots from beyond the arc. Team Nigeria made a total of 21 3-pointers in the game. The hot shooting certainly helped Team Nigeria propel past Team USA for victory, but the toughness and effort displayed cannot go unnoticed.

How Nigeria Got Here:

Led by renowned Head Coach Mike Brown, the D’Tigers have a plethora of NBA talent on the roster and that was showcased tonight. There are 3 members of the Miami Heat on the team in KZ Okpala, Precious Achiuwa and Gabe Vincent. Also on the team from the NBA is Josh Okogie, Jahlil Okafor, Chimezie Metu , Jordan Nwora and veteran Ekpe Udoh. Although it is clear that there is a high-level of talent, one non-NBA star shined bright — Caleb Agada. This young man definitely put himself on the radar tonight. Agada displayed his scoring ability pouring in 18 points — a huge contribution. He led the Israeli league in scoring this past season and after that performance it is safe to say he probably will land on an NBA roster.

Who to Watch on Team Nigeria:

Team Nigeria has talent all over the floor but a young, raw prospect that could really benefit from the physicality of the foreign game and this experience is the long, skilled KZ Okpala. Okpala can guard a variety of positions as he started the game on Damian Lillard and was later in the closing lineup guarding Kevin Durant. He can shoot the long ball and also has the ability to put the ball on floor and make plays for his teammates. A lot like Brandon Ingram, Okpala has the frame to be a successful NBA player and this experience will only be beneficial for the youngster out of Stanford.

The Future for Team Nigeria:

As an inexperienced country playing in the Olympics, Nigeria has to find their identity — what they take pride in. After watching the game tonight, effort, athleticism and togetherness really stick out in how this team can form a culture and build on this massive win. Mike Brown at the helm is a perfect leader because of the different levels of experience he has around the basketball world.

“It doesn’t count.” That is the best thing Team USA can take away from this game, as there is likely a ton of shock amongst the team. This could, however, be a good thing for team USA as they pursue another gold medal. Kevin Durant started the game 2-of-11 before hitting some clutch three-pointers down the stretch. KD’s slow start definitely impacted the score early on. The US is 54-2 since 1992 in scrimmage games and this blunder is a stunner to everyone involved. But give Nigeria credit, as coach Popovich said after the game, “They made a lot of threes.”

Who to watch for USA:

Every time the Olympics come around, one player always takes his game to the next level and becomes a star amongst the stars. Whether it was Charles Barkley with the Dream Team or Kobe Bryant  setting the tone for the 2008 squad, somebody always steps up. The player who could take on that challenge for this team is Damian Lillard. With range from the parking lot and as tough as they come, Dame has the ability to shine on this team. Shooting is massive in overseas basketball and Lillard can keep the pressure on at all times. In his first Olympics, it isn’t hard to expect a brilliant run for Dame Time.

Similar to the shining star bit, there is always a leader who steps up for the decorated team. The most recent veteran leader who stands out would be Jason Kidd and the impact he had on the Olympic team that went to Beijing. Draymond Green can be that same voice for this squad as his defense and energy can jump start everyone at any time. Championship pedigree and the ultimate competitor, Draymond can be a pivotal asset in closing lineups and setting crucial screens to get shooters good looks. Green will no doubt have his voice heard on this rendition of team USA.

Stay tuned for more coverage of Olympic Basketball this summer.