The most dangerous eighth seed ever?

The most dangerous eighth seed ever?

Most fans would probably say that the Nets were the latest “superteam”. After recovering from a torn
achilles, it didn’t take long to see that Kevin Durant was still amazing for maintaining his status in the
upper echelon, even though he was sidelined for an entire season. Once Kevin Durant put the league
back on notice, there was a strong mutual interest between him and James Harden, who was more than
ready to follow his old cast of teammates out of Houston. Harden and KD’s reunion was an afterthought
though to analysts who quickly anointed the newest Big 3 of Kevin Durant, James Harden, and Kyrie
Irving as a team with one of the highest offensive ceilings ever. They became immediate title favorites,
and remained so the following season, even after a second-round loss in the playoffs. However, through
injuries, load management, and other circumstances, the trio only ever played 16 games together.
Despite New York City mandating the COVID-19 vaccination, Kyrie refused to play a role in public safety,
and therefore forfeited a rotation spot for over half of this season. The most common theory is that it
was the lack of help from Kyrie that led to Harden’s departure. 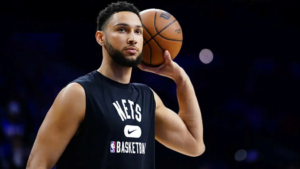 The fact that former Rockets general manager, Daryl Morey, eventually traded for Harden again might
sound too much like a fairy tale to believe. With only a year gap in between their time together, Harden
aided his old buddy in trading away Ben Simmons amidst one of the most disastrous situations ever, and
so far Morey’s won the deal. Although the Nets were over a barrel given the trade deadline and the
flight risk, they are the ideal situation for Simmons, who was second in Defensive Player of the Year
voting last season. The stellar shooting on the Nets’ roster, including Kevin Durant, Kyrie Irving, Seth
Curry, Patty Mills, and Joe Harris, also allows Simmons to fit on offense as well as anywhere else. He
could either excel in Bruce Brown’s current role, or be part of a small ball frontcourt with Kevin Durant.
As of now, Simmons has been ruled out for the play-in tournament, and there has been no hint about
returning if they advance beyond that. Even though that is an enormous blow to Nets fans, an
unappreciated facet of the trade was Andre Drummond’s presence that can bother all of the giants in
the association.